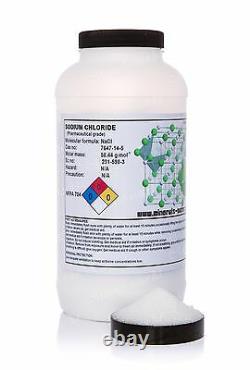 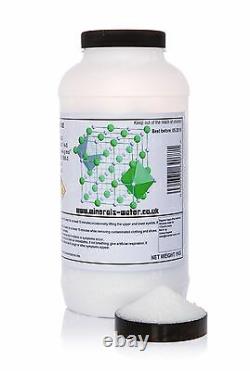 Molecular formula: NaCl This is 1kg of Sodium chloride pharmaceutical supplied in very strong HDPE bottle. Chemicals production Salt is the source, directly or indirectly, for the production of many chemicals, which consume most of the world's production. Chlor-alkali industry It is the starting point for the Chloralkali process, which provides the world with chlorine and sodium hydroxide. Soda ash industry Via the Solvay process, sodium chloride is used to produce sodium carbonate and calcium chloride.

Sodium carbonate is used to produce glass, sodium bicarbonate, and dyes as well as myriad other chemicals. In the Mannheim process and in the Hargreaves process, it is used for the production of sodium sulfate and hydrochloric acid. Miscellaneous industrial uses Sodium chloride is heavily used, so even miscellaneous applications can consume massive quantities.

In oil and gas exploration, salt is an important component of drilling fluids in well drilling. It is used to flocculate and increase the density of the drilling fluid to overcome high downwell gas pressures.

Whenever a drill hits a salt formation, salt is added to the drilling fluid to saturate the solution and to minimize the dissolution within the salt stratum. One of its main roles is to provide the positive ion charge to promote the absorption of negatively charged ions of dyes.

It also is used in processing aluminium, beryllium, copper, steel and vanadium. In the pulp and paper industry, salt is used to bleach wood pulp. It also is used to make sodium chlorate, which is added along with sulfuric acid and water to manufacture chlorine dioxide, an excellent oxygen-based bleaching chemical. The chlorine dioxide process, which originated in Germany after World War I, is becoming more popular because of environmental pressures to reduce or eliminate chlorinated bleaching compounds. In tanning and leather treatment, salt is added to animal hides to inhibit microbial activity on the underside of the hides and to attract moisture back into the hides.

In rubber manufacture, salt is used to make buna, neoprene and white rubber types. Salt brine and sulfuric acid are used to coagulate an emulsified latex made from chlorinated butadiene. Salt also is added to secure the soil and to provide firmness to the foundation on which highways are built.

The salt acts to minimize the effects of shifting caused in the subsurface by changes in humidity and traffic load. Water softening Hard water contains calcium and magnesium ions that interfere with action of soap and contribute to the buildup of a scale or film of alkaline mineral deposits in household and industrial equipment and pipes. These resins are generated and regenerated using sodium chloride.

Food industry, medicine and agriculture Firefighting A class D fire extinguisher for various metalsSodium chloride is the principal extinguishing agent in fire extinguishers (Met-L-X, Super D) used on combustible metal fires such as magnesium, potassium, sodium, and NaK alloys (Class D). Thermoplastic powder is added to the mixture, along with waterproofing (metal stearates) and anti-caking materials (tricalcium phosphate) to form the extinguishing agent. When it is applied to the fire, the salt acts like a heat sink, dissipating heat from the fire, and also forms an oxygen-excluding crust to smother the fire.

The plastic additive melts and helps the crust maintain its integrity until the burning metal cools below its ignition temperature. Cleanser Since at least medieval times, people have used salt as a cleansing agent rubbed on household surfaces. It is also used in many brands of shampoo, toothpaste and popularly to de-ice driveways and patches of ice.

Biological functions In humans, a high-salt intake has long been suspected to generally raise blood pressure. More recently, it was demonstrated to attenuate nitric oxide production. Nitric oxide (NO) contributes to vessel homeostasis by inhibiting vascular smooth muscle contraction and growth, platelet aggregation, and leukocyte adhesion to the endothelium. This service is available upon request as a PDF file.

All our products are labeled in accordance with the new European regulations for Classification, Labeling and Packaging (CLP). Ltd holds no responsibility for the applications of our products once they have left our premises. We use third party couriers to distribute our products.

Whilst we do our utmost to ensure goods are delivered on time, we cannot hold any responsibility for goods once they have been dispatched. Please read our full terms & condition before purchasing any product.

(An example of how we will send your parcel). For Highlands, Channel Islands and Northern Ireland.